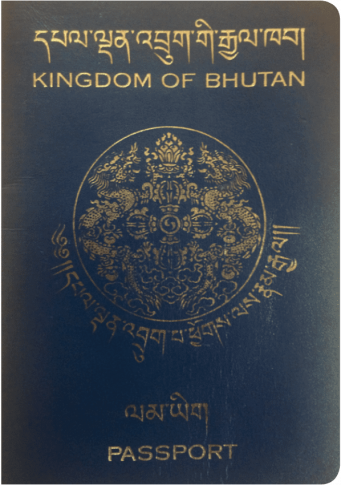 The Bhutanese passport currently ranks on the 90th place according to the Guide Passport Ranking Index. It provides visa-free access to 54 destinations. Bhutanese passport holders have visa-free access and visas on arrival to countries such as Bangladesh, Thailand, Philippines, Singapore and Sri Lanka. Passport holders of this country do however require a visa to enter about 175 countries in the world. This high visa requirement results in an overall low mobility score and requires prolonged travel planning.

Altogether, Bhutan passport holders can enter a total of 54 destinations—either without a visa, through a visa on arrival, or via an eTA. As a result, the Bhutan passport ranks 90 in the world.

Separate from these Bhutan visa-free countries and visa-on-arrival countries, there are 175 additional destinations which Bhutan passport holders either need a physical visa to enter or an eVisa (i.e. visa required countries).

The landlocked Kingdom of Bhutan is a former British colony consisting of twenty districts. It is located in Southern Asia. The country borders China and India. The most important districts are Thimpu, Chhukha and Samtse. Bhutan has a surface area of 38,394 square kilometers making it one of the smaller countries in Southern Asia. Its geography is dominated by mostly mountainous terrain with some fertile valleys. The climate is diverse, with tropical weather in the southern plains, severe winters in the Himalayas and temperate climate in the valleys.

The overall population is approximately 754,388 people. The capital of the country is Thimphu, which is also the most populous city with 114,00 inhabitants. Other important cities of the county are Phuntsholing and Paro. The largest and only international airport is Paro International Airport (PBH) with an approximate yearly passenger traffic of 181,000 people. Due to its remote location in the mountains, there are only 12 pilots in the world with the necessary certification to land.

Its culture is rich and unique due to its full isolation up until the mid-20th century. 75% of the population is Buddhist. The official language is Dongkha with different dialects and languages spread throughout the country. The legal system is the civil law based on the Buddhist religious law. The government form is a constitutional monarchy with King Jigme Khesar Namgyel Wangchuk as Chief of State and Lotay Tshering as Prime Minister.

The official currency of the country is the Bhutanese Ngultrum (BTN) with the current exchange rate being BTN 74 to the USD. The BTN is pegged to the Indian Rupee at par. The country has an open economy, generating a GDP of approximately $7.7 billion. It has a per capita income of $9,426 ranking 115th in the world. The GDP is mostly made up of 2 key sectors, which are agriculture and services. Its main goods of export and GDP contributors are cement, wood products, processed fruits, rice and tourism.

Bhutan offers several tourist attractions and destinations. It is known for its vast wildlife and beautiful mountain sceneries. Popular activities are adventure trekking and hiking. Some of the major destinations include the Tigers’s Nest Monastery, the city of Paro, the Buddha Dodenma, Tashicho Dzong and the Dochula Pass. Bhutan has made some major steps in order to attract more tourists to the country. Only a very limited number of tourists are allowed to enter the country every year. The majority of the 274,000 yearly visitors is originating from India.

St. Vincent and the Grenadines
VISA ON ARRIVAL
36 Destinations