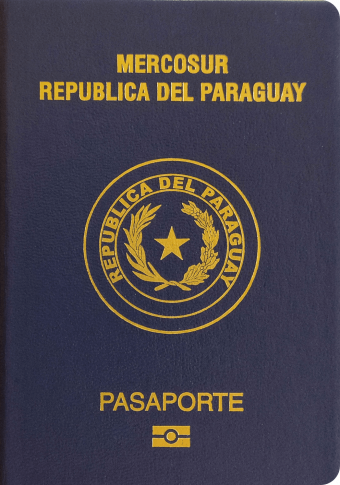 The Paraguayan passport currently ranks on the 33rd place according to the Guide Passport Ranking Index. It provides visa-free access to 145 countries. Paraguayan passport holders have visa-free access and visas on arrival to countries such as Philippines, Singapore, Russia, Turkey and the entire European Union. Paraguayan citizens do however require a visa to enter about 84 destinations in the world. Some countries where a visa is required are China, India and the USA. The passport mobility score is considered good.

Separate from these Paraguay visa-free countries and visa-on-arrival countries, there are 84 additional destinations which Paraguay passport holders either need a physical visa to enter or an eVisa (i.e. visa required countries).

The Republic of Paraguay consists of 17 departments. It is located in Central South America. The nation’s neighboring countries are Argentina, Bolivia and Brazil. The most important departments are Central, Alto Paraná and Distrito Capital. Paraguay has a surface area of 406,757 square kilometers. It is therefore the 8th largest country in South America. The country has a broad span of terrains throughout its geography from plains to marshes and forests. Its climate also varies between subtropical to temperate.

The overall population is over 7.2 million people. The capital of the country is Asunción. It is also the most populous city with 521,559 inhabitants. Other important cities are Ciudad Del Este, San Lorenzo and Luque. The largest airport Silvio Pettirossi International Airport (ASU) with 1.2 million yearly passengers. It is named after the Paraguayan aviator Silvio Pettirossi. The airport provides flight connections to Latin and North American destinations and a direct flight to Madrid. It also hosts the national carrier LATAM Paraguay.

Paraguayan culture is primarily influenced by European and Guaraní heritage. Roman Catholicism is the main religion. The official languages in the country are Spanish and Guarani. The legal system is based on the civil law. The government type is a presidential republic. The chief of state and the head of government is President Mario Abdo Benitez. Elections are taking place every 5 years.

The official currency of the country is the Paraguayan guarani (PYG). The current exchange rate being PYG 7,042 to the USD. The nation has an open economy, generating a GDP of approximately $101 billion. This makes it the 12th largest economy in South America. Its citizens have a per capita income of $15,030. The GDP is mostly made up of 2 key sectors which are services and industry. Its main goods of export are sugar, cement, textiles, wood, cotton, sugarcane, soybeans and corn. The nation is the fifth largest soybean producer in the world.

Paraguay is filled with a variety of urban and natural tourism destinations. The country is known for its one UNESCO world heritage site and many historic buildings. Popular destinations include Saltos del Monday, Ita Letra, Itaipu Dam, Ybycui National Park, Manzana de la Rivera and the Pantanal wetlands. The nation remains one of the least visited countries in South America with around 600,000 yearly visitors. The majority of the visitors arrive from the neighboring countries and the United States. The most popular activity for tourists is fishing, which attracts international visitors to the town of Pilar.