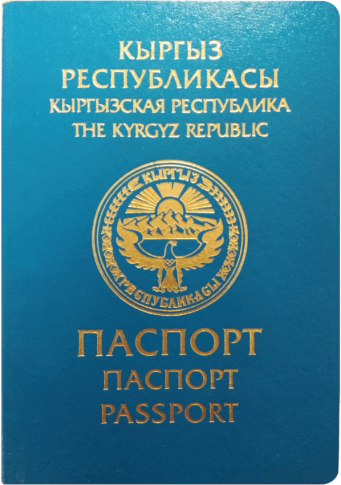 The Kyrgyzstani passport currently ranks on the 80th place according to the Guide Passport Ranking Index. It provides visa-free access to 64 destinations. This gives it an overall medium-low mobility score. Kyrgyzstani passport holders have visa-free access and visas on arrival to countries such as Russia, Turkey, Ukraine and Indonesia. Kyrgyzstani nationals require a visa to enter about 165 destinations in the world. Some of the destinations where a prior visa is required are the United States, the entire European Union, India and Japan.

Separate from these Kyrgyzstan visa-free countries and visa-on-arrival countries, there are 165 additional destinations which Kyrgyzstan passport holders either need a physical visa to enter or an eVisa (i.e. visa required countries).

The landlocked Kyrgyz Republic is a former soviet country consisting of 7 regions. The nation is situated in Central Asia. Neighboring countries include China, Tajikistan, Uzbekistan and Kazakhstan. The most important administrative divisions are Osh, Jalal-Abad and Bishkek. Kyrgyzstan has a surface area of 199,951 square kilometers. This makes it the 24th largest country in Asia. The terrain is mostly mountainous with intersecting valleys and basins. The climate is continental with warm summers and cold even frosty winters.

The overall population is over 6.5 million people. The capital of the country is Bishkek, which is also the most populous city with more than 1 million inhabitants. Other major cities are Osh and Jalal-Abad. The largest airport is Manas International Airport (FRU) with 3.5 million yearly passengers. The second largest is Osh Airport (OSS) with 1.2 million yearly passengers. Manas airport has flight connections to most Russian speaking countries and the Middle East.

Kyrgyzstani culture has evolved and blended over time, having Turkish, Russian, Iranian and Mongolian influences. The most practiced religion by the population is the Islam. The official languages are Kyrgyz and Russian. The legal system is the civil law influenced by French and Russian systems. The government type is a parliamentary republic. The head of government is the acting President Talant Mamytov and the acting Prime Minister is Artem Novikov. The elections take place every 4 years and the president is elected directly by popular vote.

The official currency of the country is the Kyrgyzstani Som (KGS) with the current exchange rate being KGS 84 to the USD. The country has an open economy, generating a GDP of approximately $25.9 billion. Its citizens have a per capita income of $4,056. The GDP is mostly made up of 2 key sectors, which are services and agriculture. The main agricultural products are meat, cotton and wool. Furthermore, exports of gold, uranium and mercury are significant. More than 25% of the GDP is generated by remittances of citizens working abroad.

Kyrgyzstan is filled with a variety of urban and natural tourism destinations and attractions. It has 3 UNESCO world heritage sites: two cultural and one natural. Some of the major destinations include the Issyk Kul Lake, Bishkek, the Ala Archa National Park, Burana, Song Kul, Tash Rabat and Osh. The nation has a total of approximately 1.7 million tourists visiting every year. Most tourists originate from Europe, Russia and its surrounding countries. It is a very popular destination especially for regional visitors.