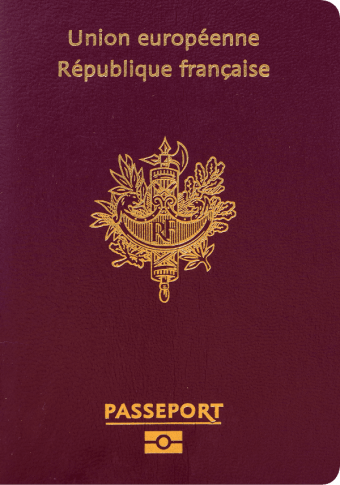 The French passport currently ranks on the 7th place according to the Guide Passport Ranking Index. It provides visa-free access to 190 countries. It is considered one of the most desirable passports in the world with a very high mobility score. French passport holders have visa-free access and visas on arrival to countries such as Brazil, Japan, the United Kingdom, United Arab Emirates and United States allowing almost instant travel worldwide. French passport holders do however require a visa to enter about 39 destinations in the world.

Altogether, France passport holders can enter a total of 190 destinations—either without a visa, through a visa on arrival, or via an eTA. As a result, the France passport ranks 7 in the world.

Separate from these France visa-free countries and visa-on-arrival countries, there are 39 additional destinations which France passport holders either need a physical visa to enter or an eVisa (i.e. visa required countries).

The French Republic consists of 13 regions, 5 overseas regions and 5 overseas collectivities. The nation is part of the European Union and its neighboring countries are Spain, Belgium, Luxemburg, Germany, Switzerland and Italy. The most important provinces are Île de France, Auvergne-Rhône-Alpes and Hauts-de-France. The French Republic has a total area of 640,679 square kilometers, Metropolitan France 551,695 square kilometers. Making it the 3rd largest country in Europe. Its climate is generally temperate with cool winters and mild summers. Although the climate changes throughout its many regions. The terrain is comprised of mostly flat plains and hills with mountains in the Alps and Pyrenees.

The overall population is over 67 million people. The capital of the country is Paris, which is also the most populous city with 2.1 million inhabitants, followed by Marseille and Lyon. Other important cities are Strasbourg, Lille, Nice, Bordeaux and Cannes. The largest airport is Charles de Gaulle Airport (CDG) with over 76 million yearly passengers. It is the 2nd largest airport in Europe and the 9th largest airport in the world. It provides access to every continent.

French culture is rich of history and heritage, with Roman Catholic religion as the main religion. The official language is French. The legal system is the civil law with the judicial review of any administrative acts. The government type is a semi-presidential republic. The elected chief of state is currently President Emmanuel Macron and the head of government is Prime Minister Jean Castex.

The official currency is the Euro (EUR) with the current exchange rate being EUR 0.84 to the USD. The country has an open market economy, generating a GDP of approximately $2.9 trillion, making it the 4th largest economy in Europe. Its citizens have a per capita income of $45,454. The GDP is mostly made up of services and the industry sector. Its main goods of export are machinery, chemicals, automobiles, wheat and wine. A very large GDP contributor is tourism with 10% of the overall GDP.

France is filled with a variety of urban, cultural and natural tourism destinations and attractions. It is especially known for its rich culture and historic sites, attracting tourists during winter and summer. Some of the major destinations include the capital Paris, the Palace of Versailles, the Côte d’Azur, Mont Saint-Michel, the Loire Valley, the Provence, Alsace and the Alps. France is the number one receiver of tourists in the world with a total of 90 million visitors annually. The majority of tourists are originating from Europe, China and the United States.