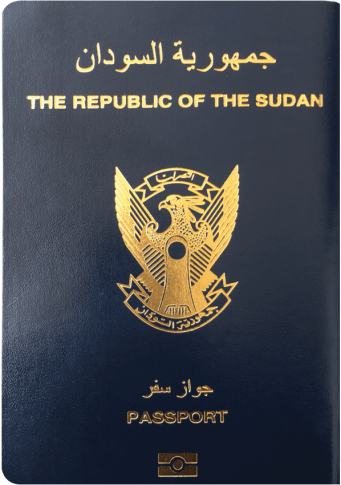 The Sudanese passport currently ranks on the 103rd place according to the Guide Passport Ranking Index. It provides visa-free access to 40 destinations. Sudanese passport holders have visa-free access and visas on arrival to countries such as Bangladesh, Nepal and Ghana. Sudanese citizens require a visa to enter 189 destinations in the world such as China, Russia, the United States and the entire European Union. This high visa requirement results in a very low mobility score.

Altogether, Sudan passport holders can enter a total of 40 destinations—either without a visa, through a visa on arrival, or via an eTA. As a result, the Sudan passport ranks 103 in the world.

Separate from these Sudan visa-free countries and visa-on-arrival countries, there are 189 additional destinations which Sudan passport holders either need a physical visa to enter or an eVisa (i.e. visa required countries).

The Republic of the Sudan is a former British colony. It is located in North-Eastern Africa and consists of 18 states. It borders Eritrea, Ethiopia, South Sudan, the Central African Republic, Chad, Libya and Egypt. The most important states are Khartoum, South Darfur and Gezira. Sudan is the 3rd largest country in Africa with a surface area of over 1.8 million square kilometers. Its climate is hot with seasonal rainfall. Its terrain is characterized by large flat plains with more desert in the north.

The overall population is over 44 million people. The capital is Khartoum, which is also the largest city in the country. Other important cities are Omdurman, Nyala and Port Sudan. The largest airport is Khartoum International Airport (KRT) with a yearly passenger traffic of over 3.5 million people. It connects the country to destinations across Africa and the Middle East.

Sudan gained independence in 1956. Its culture is dominated by a mix of traditions from multiple ethnic groups. The main religion is the Islam. The official languages of the nation are English and Arabic. The legal system is based on the English common and Islamic law. The government form is a presidential republic.

The official currency is the Sudanese pound (SDG) with the current exchange rate being SDG 55 to the USD. Sudan has an open economy, generating a GDP of approximately $177.6 billion. This makes it the 10h largest economy in Africa. It has a per capita income of $4,232. The main GDP contributing sectors are services and agriculture. Sudan is the biggest producer and exporter of gum Arabic and over 80% of the population are employed in the agriculture sector. The main export products are cotton, peanuts, sorghum, millet, wheat, oil, cotton, textiles and cement.

Sudan is a developing tourism destination. It is known for its wildlife and nature. There are three UNESCO world heritage sites scattered across the country. The main tourist activities are animal watching and hiking. Some destinations are Meroe, Suakin, Khartoum, Kerma, the Dinder National Park, the Sanganeb National Park, Port Sudan and Arkawit. The number of yearly tourism visitors is not known but the government is aiming to attract more tourists in the future by starting infrastructure improvements.