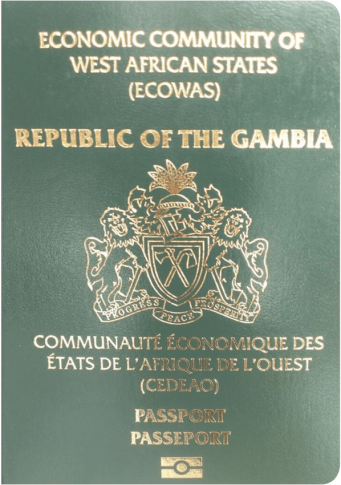 The Gambian passport currently ranks on the 76th place according to the Guide Passport Ranking Index. It provides visa-free access to 68 destinations. This gives it an overall medium-low mobility score. Gambian passport holders have visa-free access and visas on arrival to countries such as Malaysia, Senegal, Singapore and Barbados. Gambian nationals require a visa to enter about 161 destinations in the world. Some of the destinations for which a prior visa is required are the United States, the European Union, the United Kingdom and Japan.

Altogether, Gambia passport holders can enter a total of 68 destinations—either without a visa, through a visa on arrival, or via an eTA. As a result, the Gambia passport ranks 76 in the world.

Separate from these Gambia visa-free countries and visa-on-arrival countries, there are 161 additional destinations which Gambia passport holders either need a physical visa to enter or an eVisa (i.e. visa required countries).

The Republic of The Gambia is a former British colony consisting of 5 regions. The nation is situated in Western Africa and is bordered by Senegal and the North Atlantic Ocean. The most significant regions are West Coast, Banjul and Upper River. The Gambia has a surface area of 10,689 square kilometers. This makes it the 6th smallest country in Africa. Its climate is tropical with a rainy and a dry season. Its terrain is characterized by the flood plain of the Gambia river, mangroves and savanna.

The Gambia has an overall population of over 2.1 million people. This makes it the 44th most populated country in Africa. The capital of the nation is Banjul, which is also the most populous city with over 443,000 inhabitants. Other major cities are Serrekunda, Brikama and Bakau. The largest airport is Banjul International Airport (BJL). The airport connects the Gambia to a variety of destinations in Africa, Europe and Turkey.

Gambian culture is influenced by a variety of ethnic groups. The main religion is the Islam. The official language is English. The legal system is mixed between the English common, the sharia and customary law. The government type is a presidential republic. The chief of state and the head of government is the elected President Adama Barrow. The elections take place every 5 years and the president is elected directly by popular vote.

The official currency of the country is the Gambian dalasi (GMD) with the current exchange rate being GMD 51 to the USD. The country has an open economy, generating a GDP of approximately $5.4 billion. Its citizens have a per capita income of $2,240. The GDP is mostly made up of 3 key sectors, which are agriculture, industry and services. The agricultural sector is very important and has much room to further develop. Around 20% of the GDP are contributed by remittances of Gambians working abroad. Other currently important export goods are peanuts, fish, rice, millet, sorghum and peanuts.

The Gambia is a developing tourism destination. It is known for the diverse wildlife and accessible national parks. It has 2 UNESCO world heritage sites spread around the country. Some of the major destinations include the Abuko Nature Reserve, Banjul, Brufut Beach, Sanyang Village and Beach, the National Museum and the Wassu Stone Circles. The nation has a total of over 550,000 tourists visiting every year.