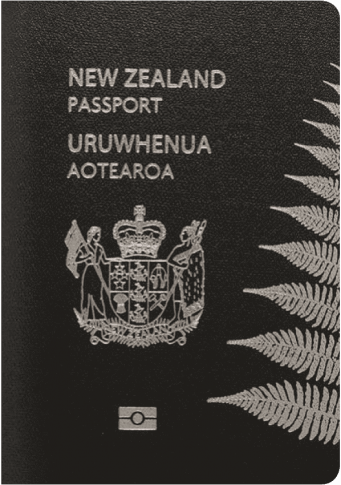 The New Zealand passport currently ranks on the 7th place according to the Guide Passport Ranking Index. It provides visa-free access to 190 countries. With a high mobility score it is one of the most desirable passports in the world. New Zealand passport holders have visa-free access and visas on arrival to countries such as Japan, United Kingdom, United Arab Emirates, USA and the entire European Union. This allows almost instant travel opportunities. New Zealand passport holders do however require a visa to enter about 39 destinations in the world. Some countries where visa is required are China, India, Russia and Cuba.

Separate from these New Zealand visa-free countries and visa-on-arrival countries, there are 39 additional destinations which New Zealand passport holders either need a physical visa to enter or an eVisa (i.e. visa required countries).

The island nation of New Zealand is a former British colony consisting of 16 regions. The most important regions are Auckland, Canterbury, Wellington and Waikato. The country is situated in Oceania, South Pacific Ocean, just southeast of Australia. New Zealand is the 4th largest country in Oceania with a surface area of 268,021 square kilometers. Its climate is mostly temperate with some regional differences. The terrain is characterized by mountains with vast coastal plains.

The overall population is over 5 million people. The capital of the country is Wellington. The most populous city is however Auckland with 1.4 million inhabitants. Other major cities are Christchurch and Hamilton. The largest airport is Auckland Airport (AKL) with over 21 million annual passengers. Followed by Christchurch (CHC) with more than 6.9 million yearly passengers. Together they provide flight connections to most destinations in the region and beyond.

New Zealand’s culture is dominated by the history of immigration waves that occurred over the past centuries. There is a multi-cultural and religious mix present in most of the country. The official languages are English and Maori. The legal system is a federal parliamentary democracy under a constitutional monarchy. The chief of state is Queen Elizabeth the II. The head of government is the elected Prime Minister Jacinda Ardern.

The official currency is the New Zealand Dollar (NZD) with the current exchange rate being NZD 1.4 to the USD. The country has an open economy, generating a GDP of approximately $193 billion, making it the 2nd largest economy in Oceania. Its citizens have a per capita income of $41,072. The GDP is mostly made up of 2 key sectors, which are services and industry. Some of the main export products are timber, minerals, dairy products, meat, vegetables and wine. New Zealand signed a variety of trading agreements in order to grow trade. China is their most important export partner. Furthermore, tourism plays a large role economically for certain key regions.

New Zealand is filled with a variety of urban and natural tourism destinations and attractions. It is known for its vast wildlife and various national parks. Some of the major destinations include the Fiordland National Park, the Bay of Islands, Queenstown, Lake Taupo, Rotorua and Auckland. The nation has a total of approximately 3.8 million tourists visiting every year with the majority originating from China and Australia.