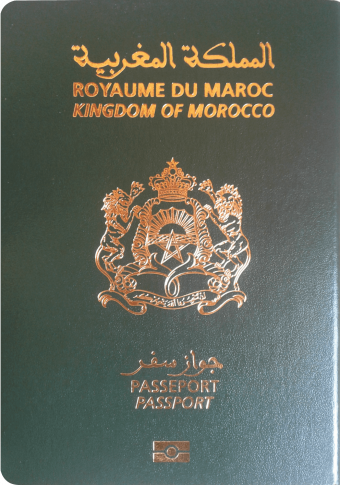 The Moroccan passport currently ranks on the 81st place according to the Guide Passport Ranking Index. It provides visa-free access to 63 destinations. This gives it an overall medium-low mobility score. Moroccan passport holders have visa-free access and visas on arrival to countries such as Brazil, South Korea, Nigeria and Turkey. Moroccan nationals require a visa to enter about 166 destinations in the world. This high visa requirement gives it an overall low mobility score. Some of the destinations where a prior visa is required are the United States, the European Union and Japan.

Altogether, Morocco passport holders can enter a total of 63 destinations—either without a visa, through a visa on arrival, or via an eTA. As a result, the Morocco passport ranks 81 in the world.

Separate from these Morocco visa-free countries and visa-on-arrival countries, there are 166 additional destinations which Morocco passport holders either need a physical visa to enter or an eVisa (i.e. visa required countries).

The Kingdom of Morocco is a former French colony consisting of 12 regions. The country is situated in the Maghreb in Northern Africa. The nation neighbors Algeria and Mauritania. The most important regions are Tanger, Marrakech-Safi and Casablanca-Settat. It has a surface area of 710,850 square kilometers. It is therefore the 18th largest country in Africa. Morocco’s terrain is characterized by mountains in the north and central, and fertile coastal plains. Its climate is Mediterranean with more extreme variations in the interior.

The overall population is over 37 million people. The capital of the country is Rabat. The most populous city however is Casablanca with 3.3 million inhabitants. Other major cities are Fez and Tangier. Mohammed V International Airport is one of the largest airports in Morocco (CMN), and this airport records a travel movement of more than 7 million passengers annually. The second-largest Moroccan airport is Marrakech-Menara Airport (RAK), through which about 9 million passengers travel annually. Both airports have excellent flight connections to the entire European Union and beyond.

Moroccan culture has evolved over the course of history with influences from the East, South and North. The main religion of the country is Islam. The official languages are Arabic and Berber. The legal system is based on the French civil law and Islamic sharia law. The government type is a parliamentary constitutional monarchy. The head of government is the King Mohammed VI and the Prime Minister is Saad-Eddine Al Othmani. The elections take place every 6 years.

The official currency is the Moroccan Dirham (MAD) with the current exchange rate being MAD 9.1 to the USD. The country has an open economy, generating a GDP of approximately $332 billion. Its citizens have a per capita income of $9,339. The GDP is mostly made up of 2 key sectors, which are industry and agriculture. Morocco is a diversified economy, capitalizing on its low labor cost and proximity to Europe. Some of the main export products are automotive parts, phosphate, aerospace products, textile, barley, wheat and citrus fruits. The GDP is stable and the government is seeking ways to sign new trade agreements.

Morocco is filled with a variety of urban and natural tourism destinations and attractions. It is known for its beautiful beaches, historic sites and different cultural facets. It has 9 UNESCO world heritage sites. Some of the major destinations include Marrakesh, Hassan II Mosque, Oudaias Kasbah, Fes el Bali, Tangier, Chefchaouen, Bab Al Mansour and the Rif Mountains. The nation has a total of approximately 13 million tourists visiting every year. The majority of tourists originate from Europe and its surrounding countries.