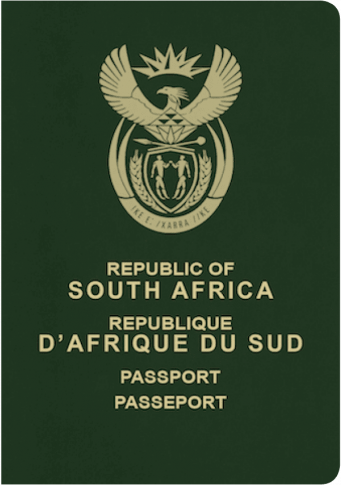 The South African passport currently ranks on the 53rd place according to the Guide Passport Ranking Index. It provides visa-free access to 103 countries. South African passport holders have visa-free access and visas on arrival to countries such as Indonesia, Philippines, Singapore, Israel and Russia. South African citizens do however require a visa to enter 126 destinations in the world such as Taiwan, Canada, Mexico, the United States and the entire European Union. This high visa requirement results in a medium mobility score.

Separate from these South Africa visa-free countries and visa-on-arrival countries, there are 126 additional destinations which South Africa passport holders either need a physical visa to enter or an eVisa (i.e. visa required countries).

The Republic of South Africa is a former British colony. It is located in Southern Africa and it consists of nine provinces. It borders Namibia, Botswana, Zimbabwe, Mozambique, Eswatini and Lesotho. The most important provinces are Gauteng, KwaZulu-Natal and Eastern Cape. South Africa is the 9th largest country in Africa with a surface area of 1,221,037 square kilometers. This makes it one of the larger countries in Africa. Its terrain is characterized by a vast interior plateau surrounded by hills and coastal plains. The climate is semiarid with subtropical parts alongside the eastern coast.

The overall population is 59.6 million people. The capital of the country is Pretoria. The most populous city with around 5.6 million inhabitants is however Johannesburg. Other important cities of the country are Cape Town, Bloemfontein and Durban. The largest airport is O. R. Tambo International Airport (JNB). It has an approximate yearly passenger traffic of 21 million people. It connects the country to destinations across the entire world.

South Africa gained independence from the United Kingdom in 1931. Its culture is dominated by a mix of tribal traditions and colonial and European heritage. There majority of the population is 86% Christian. The nation has 11 official languages including English and Tribal dialects. The legal system is a mix between, civil, common and customary law. The government form is a parliamentary republic with President Matamela Cyril Ramaphosa as elected chief of state and head of government. Elections take place every 5 years.

The official currency of the country is the South African Rand (ZAR) with the current exchange rate being ZAR 15.6 to the USD. South Africa has an open economy, generating a GDP of approximately $711 billion. This makes it the 3rd largest economy in Africa. It has a per capita income of $11,911. The main GDP contributing sectors are services and agriculture. South Africa’s economy relies heavily on mining. It is one of the most mineral rich countries in the world and the largest producer of platinum, gold and chromium.

The Republic of South Africa is an exciting destination offering several attractions. It is known for its vast wildlife and safari tours in various national parks. Some of the major destinations are the Kruger National Park, Cape Town, the Garden Route, Stellenbosch, Drakensberg and Robben Island. The majority of the 16.4 million yearly tourism visitors is originating from the neighboring African countries, the United States and Europe.