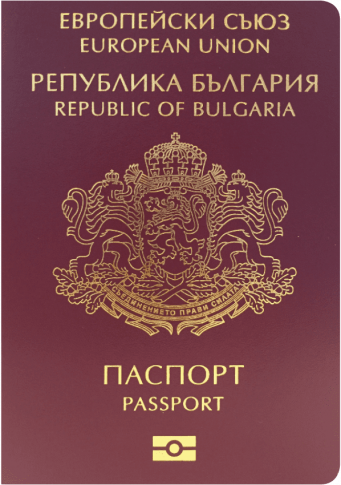 The Bulgarian passport currently ranks on the 18th place according to the Guide Passport Ranking Index. It provides visa-free access to 175 countries. With a high mobility score it is one of the best ranking passports in the world. Bulgarian passport holders have visa-free access and visas on arrival to countries such as United Kingdom, United Arab Emirates, Japan and the entire European Union. This allows almost instant travel opportunities worldwide. Bulgarian passport holders do however require a visa to enter about 54 destinations in the world. Some countries where a visa is required are China, India and the United States.

Separate from these Bulgaria visa-free countries and visa-on-arrival countries, there are 54 additional destinations which Bulgaria passport holders either need a physical visa to enter or an eVisa (i.e. visa required countries).

The Republic of Bulgaria consists of 28 Provinces and is part of the European Union. The most important provinces are Sofia City, Plovdiv and Varna. The nation is situated in Southeastern Europe, bordering Turkey, Greece, Northern Macedonia, Serbia, Romania and the Black Sea. Bulgaria is the 16th largest country in Europe with a surface area of 110,993 square kilometers. Its climate is mostly temperate. The terrain is mainly mountainous with lowlands in the north and southeast.

The overall population is 6.9 million people, making it one of the least populous countries in the EU. The capital of the country is Sofia., which is also the most populated city with 1.2 million inhabitants. It is followed by Plovdiv and Varna. The largest airport is Sofia Airport (SOF) with 7 million annual passengers. Burgas Airport (BOJ) is the second biggest airport with 2.8 million yearly passengers. Both airports together cover domestic and international routes connecting Bulgaria to the European Union and Middle East.

Bulgaria’s culture is dominated by old folk traditions blended with the heritage of the Ottoman Empire. There is a multi-national mix and the Easter Orthodox Religion is predominant. The official language is Bulgarian. The legal system is based on the Civil Law. The government type is a parliamentary republic. The chief of state is the elect President Rumen Radev and the head of government is the elected Prime Minister Boyko Borisov.

The official currency is the Bulgarian Lev (BGN) with the current exchange rate being BGN 1.66 to the USD. The country has an open economy, generating a GDP of approximately $180 billion, which puts it on the 32nd spot in the European Union. Its citizens have a per capita income of $26,034. The GDP is mostly made up of 2 key sectors, which are services and industry. Some of the most important export products are coal, gas, fruits and electricity.

Bulgaria has a variety of urban and natural tourism destinations. There are 9 UNEECO world heritage sites in the country. Some of the major destinations include the Alexander Nevsky Cathedral, the Krushuna Waterfalls, the Buzludzha Monument and the Pirin National Park. The nation has a total of approximately 7.8 million tourists visiting every year with the majority originating from Europe and its surrounding countries. Apart from the already developed tourism sectors, Bulgaria is focusing on further developing its winter tourism and ski resorts.