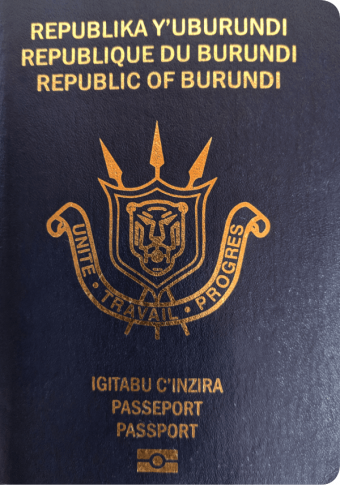 The Burundian passport currently ranks on the 94th place according to the Guide Passport Ranking Index. It provides visa-free access to 49 destinations. Burundian passport holders have visa-free access and visas on arrival to countries such as Indonesia, Philippines, Singapore and Serbia. Burundian citizens do however require a visa to enter 180 destinations in the world such as China, Russia, the United States and the entire European Union. This high visa requirement results in a low mobility score.

Altogether, Burundi passport holders can enter a total of 49 destinations—either without a visa, through a visa on arrival, or via an eTA. As a result, the Burundi passport ranks 94 in the world.

Separate from these Burundi visa-free countries and visa-on-arrival countries, there are 180 additional destinations which Burundi passport holders either need a physical visa to enter or an eVisa (i.e. visa required countries).

The Republic of Burundi is a former Belgian colony. Located in Central Africa it consists of 18 provinces. It borders Tanzania, Rwanda and the Democratic Republic of the Congo. The most important provinces are Gitega, Ngozi and Muyinga. Burundi is a relatively small country in Africa with a surface area of 27,834 square kilometers. Its climate is equatorial and the geography is dominated by hilly and mountainous terrain.

The overall population is 11.8 million people. The capital of the country is Gitega. The largest city is however Bujumbura with 331,000 inhabitations. Other important cities of the country are Bobo-Muyinga, Ruyigi and Ngozi. The largest airport is Melchior Ndadaye International Airport (BJM). It has an approximate yearly passenger traffic of 131,000 people. It connects the country to destinations across Africa and to Belgium. It is named after Melchior Ndadaye, the first democratically elected president of the county.

Burundi gained independence from Belgium in 1962. Its culture is dominated by a mix of traditions and the Belgian heritage. The main relation of the country is Roman Catholic with 62% practicing. The official languages of the nation are French, Kirundi and English. The legal system is based on the Belgian civil and customary law. The government form is a presidential republic. President Evariste Ndayishimiye is the elected chief of state and head of government. Elections take place every 5 years.

The official currency of the country is the Burundi franc (BIF) with the current exchange rate being BIF 1,934 to the USD. Burundi has an open economy, generating a GDP of approximately $8.3 billion. This makes it one of the smallest economies in Africa. It has a per capita income of $727. The main GDP contributing sectors are services and agriculture. The main export products are coffee and gold. Further diversification is sought after by the government but is developing only slowly.

Burundi is a developing tourism destination offering limited attractions. It is known for its wildlife and national parks. Some destinations are the capital Bujumbura, the Rusizi River National Park, the Kigwena Natural Forest and Mounth Heha. The majority of the 299,000 yearly tourism visitors is originating from the neighboring African countries and some Europeans. The government has put a 20-year tourism development plan in place with financing from the African Development bank.