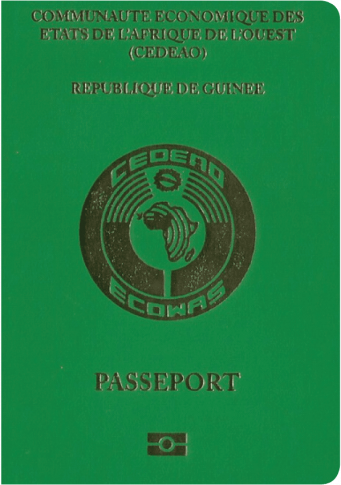 The Guinean passport currently ranks on the 89th place according to the Guide passport index. It provides visa-free access to 55 destinations. Guinean passport holders have visa-free access and visas on arrival to countries such as Malaysia, Philippines, Singapore, Ghana and Dominica. Guinean citizens do however require a visa to enter 174 destinations in the world such as China, Japan, Russia, the United States and the entire European Union. This high visa requirement results in a low mobility score.

Altogether, Guinea passport holders can enter a total of 55 destinations—either without a visa, through a visa on arrival, or via an eTA. As a result, the Guinea passport ranks 89 in the world.

Separate from these Guinea visa-free countries and visa-on-arrival countries, there are 174 additional destinations which Guinea passport holders either need a physical visa to enter or an eVisa (i.e. visa required countries).

The Republic of Guinea is a former French colony. Located in Western Africa, it consists of 8 regions. It borders with Guinea-Bissau, Senegal, Mali, Côte D’Ivoire, Liberia and Sierra Leone. The most important regions are Kankan, Conakry and Nzerekore. The nation is the 31st largest country in Africa with a surface area of 245,857 square kilometers, making it one of the smaller sized countries of the continent. Its climate is generally hot and humid with a monsoon rainy season from June to November. The terrain is characterized by low coastal plains and a hilly to mountainous interior.

The overall population is over 12.4 million people. The capital of the country is Conakry, which is also the most populous city. Other important cities of the country are Nezerekore, Kankan and Maneah. The largest airport is Conakry International Airport (CKY). It connects the country to destinations across Africa, Europe and the Middle East.

The Republic of Guinea gained independence from France in 1958. Its culture is dominated by a mix of traditions and the French heritage. There is a religious mix in the country, with the vast majority being Muslim. The official language of the nation is French. The legal system is the civil law based on the French system. The government form is a presidential republic with President Aloha Conde as elected chief of state and Prime Minister Victoire Ibrahima Fofana as head of government. Elections take place every 5 years and the president is elected by simple popular vote.

The official currency of the country is the Guinea franc (GNF) with the current exchange rate being GNF 9870 to the USD. Guinea has an open economy, generating a GDP of approximately $26.4 billion. This makes it the 32nd largest economy in Africa. It has a per capita income of $2,390. The main GDP contributing sectors are services, agriculture and industry. Guinea possesses the largest reserves of iron ore and bauxite in the world. Both of which are mostly untapped, providing it many opportunities in the future. Political instability has made it difficult to enforce reforms.

Guinea is a developing tourism destination offering several tourist attractions. It is known for its wildlife and natural sites. There is currently only one UNESCO world heritage site. The main tourist attractions are beaches and wildlife safaris. Some of the main destinations are the capital Conakry, Iles de Los, the National Park of Upper Niger, Nzerekore, the Fouta Djallon Highlands, Mount Nimba and Dubreka. There were about 99 thousand touristic visits to the country per year in average.