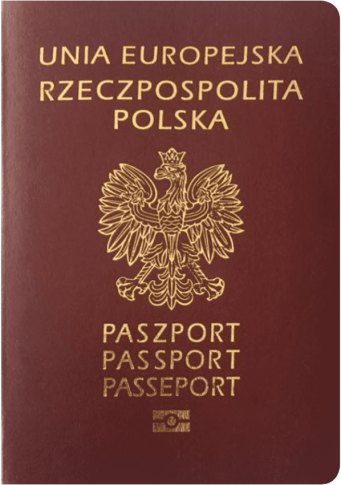 The Polish passport currently ranks on the 11th place according to the Guide Passport Ranking Index. It provides visa-free access to 185 countries. With a high mobility score it is one of the best ranking passports in the world. Polish passport holders have visa-free access and visas on arrival to countries such as the United Kingdom, United Arab Emirates, Japan and the entire European Union. This allows almost instant travel opportunities worldwide. Polish passport holders do however require a visa to enter about 44 destinations in the world. Some countries where a visa is required are China, India and Australia.

Altogether, Poland passport holders can enter a total of 185 destinations—either without a visa, through a visa on arrival, or via an eTA. As a result, the Poland passport ranks 11 in the world.

Separate from these Poland visa-free countries and visa-on-arrival countries, there are 44 additional destinations which Poland passport holders either need a physical visa to enter or an eVisa (i.e. visa required countries).

The Republic of Poland consists of 16 provinces and is part of the European Union. The most important provinces are Masovian, Silesian and Greater Poland. The nation is located in Central Europe, bordering Germany, Czechia, Slovakia, Ukraine, Belarus, Lithuania and Russia. Poland is the 9th largest country in Europe with a surface area of 312,696 square kilometers. Its climate is temperate with mild summers and moderate severe winters. The terrain is characterized by flat plains and some mountains on the southern border.

The overall population is over 38.3 million people, making it the 9th most populous country in the European Union. The capital of the country is Warsaw, which is also the most populated city with around 1.8 million inhabitants. Other important cities are Krakow and Lodz. The largest airport is Warsaw Chopin Airport (WAW) with 19 million annual passengers. The airport is named after the famous Polish composer Frederic Chopin. It covers domestic and international routes connecting Poland to the entire world.

Poland’s 1000-year history is strongly influenced by Western Europe. The vast majority of the population follows the Roman Catholic belief. The official language is Polish. The legal system is based on the civil law. The government type is a parliamentary republic. The chief of state is President Andrzej Duda and the head of government is the elected Prime Minister Mateusz Morawiecki.

The official currency of the country is the Polish zloty (PLN) with the current exchange rate being PLN 3.76 to the USD. The country has an open economy, generating a GDP of approximately $1.3 trillion, which puts it on the 8th spot in Europe. Its citizens have a per capita income of $35,651. The GDP is mostly made up of 2 key sectors, which are services and industry. Some of the most important export goods are machines, iron and steel, coal, chemicals, potatoes and fruits. The nation’s economy has been growing steadily at 3% per annum.

Poland has a variety of urban and natural historic tourism destinations. It attracts tourists for its unique culture and historic cities. There are 16 UNESCO world heritage sites scattered around the country. Some of the main destinations include the Wieliczka salt mine, Auschwitz Birkenau camp, Warsaw, the Morskie Oko Lake and Krakow. The country has a total of approximately 21 million tourists visiting every year with the majority originating from Europe and its surrounding countries.