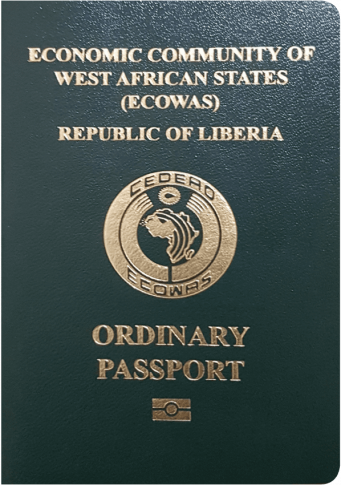 The Liberian passport currently ranks on the 95th place according to the Guide Passport Ranking Index. It provides visa-free access to only 48 destinations. Liberian passport holders have visa-free access and visas on arrival to countries such as Mauritius, Philippines, Singapore, Rwanda, United Arab Emirates and Iran. Liberian citizens require a visa to enter 181 destinations in the world. This high visa requirement results in a low mobility score and entails major trip preparations before traveling.

Altogether, Liberia passport holders can enter a total of 48 destinations—either without a visa, through a visa on arrival, or via an eTA. As a result, the Liberia passport ranks 95 in the world.

Separate from these Liberia visa-free countries and visa-on-arrival countries, there are 181 additional destinations which Liberia passport holders either need a physical visa to enter or an eVisa (i.e. visa required countries).

The Republic of Liberia is located in Western Africa and consists of 25 counties. It borders Sierra Leone, Guinea, Côte D’Ivoire and the North Atlantic Ocean. The most important provinces are Montserrado, Nimba, Bong and Lofa. Liberia is the 39th largest country in Africa with a surface area of 111,369 square kilometers. Its climate is generally tropical, hot and humid with significant heavy rainfall. Liberian terrain is mostly flat rising to low mountains in the northeast.

The overall population is over 4.8 million people. The capital of the country is Monrovia, which is the also the most populous city. Other important cities of the country are Gbarnga, Buchanan and Ganta. The largest and only international airport of the country is Roberts International Airport (ROB). It has an approximate yearly passenger traffic of 228,000. It connects Liberia to destinations across Africa and Europe.

Liberian culture is influenced by the standards and social customs of Americo-Liberians who came from the Southern states of the United States. The catholic Christianity is the most widespread religion with 85% of the population practicing this belief. The official language of the country is English. More than 20 indigenous dialects and languages are still spoken but rarely written. The legal system is a mix of common and customary law. The government form is a presidential republic with President George Weah as chief of state and head of government.

The official currency of the country is the Liberian Dollar (LRD) with the current exchange rate being LRD 155 to the USD. Liberia has an open economy, generating a GDP of approximately $6.4 billion. This makes it the 46th largest economy in Africa. Its citizens have a per capita income of $1,413. The country has a struggling economy relying on foreign aid. Some of the main export products are currently rubber, coffee, cocoa, rice, palm oil and gold. The government is encouraging foreign investment to further develop gold mining, oil drilling and timber extraction. Palm oil production is also an important new field for the economy.

The Republic of Liberia is a developing tourism destination offering limited attractions. The government describes it as “The Gateway for Tourism”. Some of the major destinations are the capital Monrovia, Sapo National Park, Robertsport, Buchanan, Gbarnga, Harbel, Kakata and Greenville. The number of tourists currently visiting is very low and are mostly originating from the neighboring African countries and the United States.