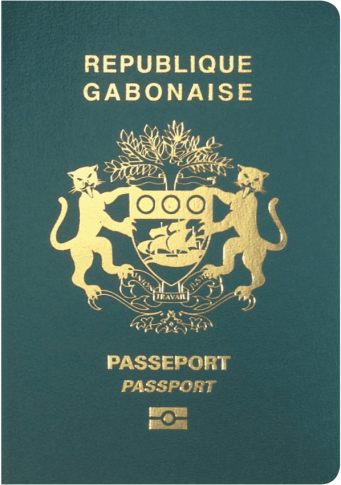 The Gabonese passport currently ranks on the 88th place according to the Guide passport index. It provides visa-free access to 56 destinations. Gabonese passport holders have visa-free access and visas on arrival to countries such as Indonesia, Philippines, Singapore, Ghana and Iran. Gabonese citizens do however require a visa to enter 173 destinations in the world such as China, Japan, Russia, the United States and the entire European Union. This high visa requirement results in a low mobility score.

Altogether, Gabon passport holders can enter a total of 56 destinations—either without a visa, through a visa on arrival, or via an eTA. As a result, the Gabon passport ranks 88 in the world.

Separate from these Gabon visa-free countries and visa-on-arrival countries, there are 173 additional destinations which Gabon passport holders either need a physical visa to enter or an eVisa (i.e. visa required countries).

The Gabonese Republic is a former French colony. Located in Central Africa it consists of 9 provinces. It borders Equatorial Guinea, Cameroon and the Republic of the Congo. The most important provinces are Estuaire, Haut Ogooué and Ogooué-Maritime. The nation is the 30th largest country in Africa with a surface area of 267,667 square kilometers. This makes it one of the smaller sized countries of the continent. Its climate is tropical being always hot and humid. Its geography is characterized by a narrow coast plain, savannah and hills in the interior.

The overall population is over 2 million people. The capital of the country is Libreville, which is also the most populous city with more than 1 million inhabitants. Other important cities of the country are Port-Gentil, Franceville and Oyem. The largest airport is Léon-Mba International Airport (LBV). It has an approximate yearly passenger traffic of 1 million people. It connects the country to destinations across Africa, France and Turkey. It is named after former politician Léon-Mba, the first President of the nation.

The Gabonese Republic gained independence from France in 1960. Its culture is dominated by a mix of traditions and the French heritage. There is a religious mix in the country, with the majority being Christians. The official language of the nation is French. The legal system is based on the French civil law and customary law. The government form is a presidential republic with President Ali Bongo as elected chief of state. The Prime Minister is Rose Christiane Ossouka Raponda as head of government. Elections take place every 7 years.

The official currency of the country is Central African CFA franc (XAF) with the current exchange rate being XAF 552 to the USD. Gabon has an open economy, generating a GDP of approximately $38.2 billion. It has a per capita income of $18,647. The main GDP contributing sectors are services and industry. The majority of income for the country originates form the oil sector, with over 45% of the GDP. Other goods of export are manganese, gold, cocoa, coffee and sugar.

Gabon is a developing tourism destination offering limited options. It is known for its wildlife and historic sites. The main tourist attractions are sightseeing and wildlife watching. Some of the main destinations are Loango National Park, the capital Libreville, Ivindo National Park, Pongara, Fernan Vaz Lagoon, Franceville and Akanda National Park. There were about 155,000 touristic visits to the country per year in average.