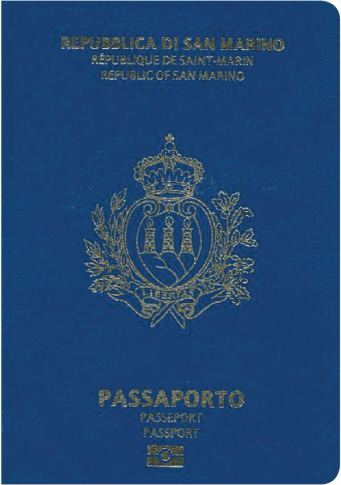 Separate from these San Marino visa-free countries and visa-on-arrival countries, there are 57 additional destinations which San Marino passport holders either need a physical visa to enter or an eVisa (i.e. visa required countries).

The landlocked Republic of San Marino consists of nine municipalities. It is located in Southern Europe and is completely surrounded by Italy. The most important municipalities are San Marino, Fiorentino and Domagnano. San Marino has a surface area of 61.2 square kilometers and is therefore the 3rd smallest county in Europe. Its climate is Mediterranean with sunny summers and mild winters. The terrain is characterized by rugged mountains.

The overall population is around 34,232 people. The capital of the country is San Marino. The most populous city is however Dogana with 7,000 inhabitants. San Marino does not have an airport and residents must travel to the nearby Rimini Airport (RMI) in Italy or take a helicopter flight from Borgo Maggiore. There are connections to the neighboring Italy via road or train, with many Sammarinese commuting between the countries regularly.

Sammarinese culture is predominantly Italian, with Roman Catholicism as the main religion. The official language is Italian. The legal system is an Italian influenced civil law. The government type is a parliamentary democracy. There are two co chiefs of state: Captain Regent Alessandro Cardelli and Captain Regent Mirco Dolcini. The head of government is the Secretary of State for Foreign and Political Affairs Luca Beccari. Elections are held every 5 years.

The official currency of the country is the Euro (EUR) with the current exchange rate being EUR 0.84 to the USD. The country has an open economy, generating a GDP of approximately $2 billion. San Marino is one of the smallest economies in Europe. Its citizens have a per capita income of $60,651. The GDP is mostly made up of 2 key sectors, which are services and industry. Its main GDP contributors are tourism, banking and export products such as textiles and ceramics.

San Marino is mostly known for its beautiful mountains and timid towns. A selection of the major destinations includes the capital San Marino, the Guiata Fortress, Monte Titano, the Basilica di San Marino, the National Museum and Palazzo Pubblico. Another reason why many people visit San Marino is its expertise in banking with leading banks such as Banca di San Marino and Banca Commerciale Sammarinese. The nation has a total of approximately 2 million tourists visiting every year with the majority originating from Italy.