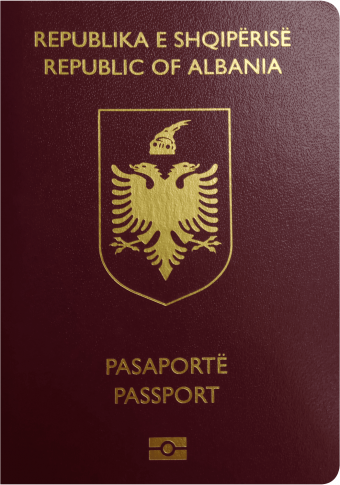 Altogether, Albania passport holders can enter a total of 117 destinations—either without a visa, through a visa on arrival, or via an eTA. As a result, the Albania passport ranks 52 in the world.

Separate from these Albania visa-free countries and visa-on-arrival countries, there are 112 additional destinations which Albania passport holders either need a physical visa to enter or an eVisa (i.e. visa required countries).

The Republic of Albania is located in Europe with neighboring countries Montenegro, Kosovo, North Macedonia and Greece. It consists of 12 counties, the most important counties are Tirana, Durres, Fier and Elbasan. Albania has a surface area of 28,748 square kilometers and is therefore one of the smaller countries in Europe. The climate is mainly Mediterranean and continental with 4 distinct seasons.

The overall population is 2.8 million people. The capital of the country is Tirana, which is also the most populous city, followed by Durres and Vlore. The largest airport is Tirana international Airport (TIA) with 3.3 million yearly passengers. This makes it the 8th busiest airport in the Balkans. Tirana airport has excellent flight connections to the entire European Union and beyond.

Albania’s culture is dominated by a mix of languages and cultures, with the Islam as main religion. The official langue is Albanian. The legal system is the civil law except for the north of the country a customary law known as “Code of Leke” is still being used. The government type is a parliamentary republic. The head of government is the elected President Ilir Meta and the Prime Minister is Edi Rama. The elections take place every 4 years and the president is elected indirectly by the assembly.

The official currency of the country is the Albanian Lek (ALL) with the current exchange rate being ALL 124 to the USD. The country has an open economy, generating a GDP of approximately $42.5 billion. Its citizens have a per capita income of $14,886. The GDP is mostly made up of 3 key sectors, which are services, industry and agriculture. Its main goods of export are footwear, apparel, lumber and cement. Tourism also plays a large role as a GDP contributor, with Albania being voted into the top 25 tourism destination of the world.

Albania is filled with a variety of urban and natural tourism destinations and attractions. It is known for its picturesque medieval historic sites and different cultural facets. Some of the major destinations include the Albanian Riviera, the Llogara Pass, the town of Berat, Lake Koman and the mountain town Theth. The nation has a total of approximately 5 million tourists visiting every year. Most tourists originates from Europe and its surrounding countries making it a very popular destination especially for regional visitors.