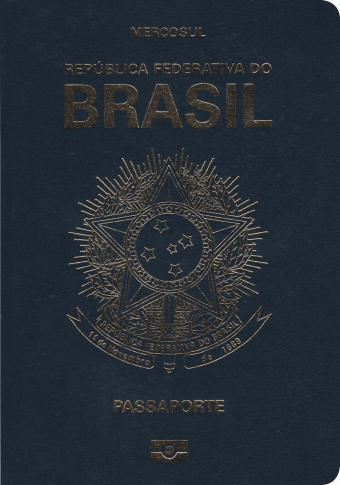 The Brazilian passport currently ranks on the 21st place according to the Guide Passport Ranking Index. It provides visa-free access to 171 countries. With a high mobility score it is one of the most desirable passports in the world. Brazilian passport holders have visa-free access and visas on arrival to countries such as United Kingdom, United Arab Emirates, Russia and the entire European Union. This allows almost instant travel opportunities worldwide. Brazilian passport holders do however require a visa to enter about 58 destinations in the world. Some countries where visa is required are China, India and the United States.

Altogether, Brazil passport holders can enter a total of 171 destinations—either without a visa, through a visa on arrival, or via an eTA. As a result, the Brazil passport ranks 21 in the world.

Separate from these Brazil visa-free countries and visa-on-arrival countries, there are 58 additional destinations which Brazil passport holders either need a physical visa to enter or an eVisa (i.e. visa required countries).

The Federative Republic of Brazil is the 5th largest country in the world consisting of 26 states. The most important provinces are Sao Paulo, Belo Horizonte and Rio de Janeiro. The nation is situated in Southeastern America bordering the Atlantic Ocean. Brazil is the largest country in South America with a surface area of 8.5 million square kilometers. Its climate is mostly tropical but temperate in the south. The terrain is mostly flat with some plains, hills and mountains.

The overall population is 210 million people, making it the largest population in South America. The capital of the country is Brasilia. The most populous city is however Sao Paulo with 12.1 million inhabitants. It is followed by Rio de Janeiro and Brasilia. The largest airport is Guarulhos International Airport (GRU) with 43 million annual passengers. Congonhas Airport (CGH) is the second biggest airport with 22 million yearly passengers. Both Sao Paulo airports together cover domestic and international routes connecting Brazil to anywhere in the world.

Brazil’s culture is dominated by the history of immigration waves and the strong ties with the colonial Portuguese empire. There is a multi-cultural and religious mix present in most of the country with the Roman Catholic belief being predominant. The official language is Portuguese. The legal system is based on the Civil Law. The government type is a federal presidential republic. The chief of state and at the same time head of government is the elected President Jair Bolsonaro.

The official currency is the Brazilian Real (BRL) with the current exchange rate being BRL 5.7 to the USD. The country has an open economy, generating a GDP of approximately $3.07 trillion, making it the largest economy in South America. Its citizens have a per capita income of $14,563. The GDP is mostly made up of 3 key sectors, which are services, industry and agriculture. Some of the most important export products are soybeans, animal products and automobiles.

Brazil is known for its vast rainforest and beautiful beaches. Some of the major destinations include Sao Paulo, Rio de Janeiro, the Iguacu Falls, the Carnival de Rio, Ipanema and the Amazon Rain forest. The nation has a total of approximately 6.3 million tourists visiting every year with the majority originating from Europe, North and South America. Tourism in Brazil has seen strong development over the past years with new destinations constantly being developed.