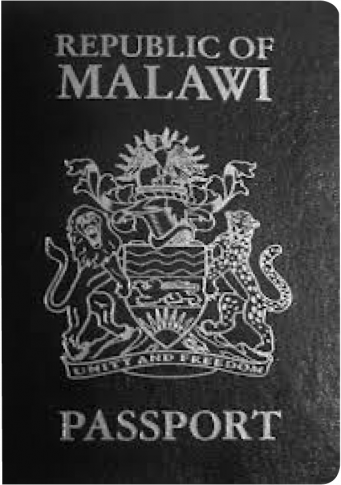 The Malawian passport currently ranks on the 72nd place according to the Guide Passport Ranking Index. It provides visa-free access to 73 destinations. This gives it an overall medium-low mobility score. Malawian passport holders have visa-free access and visas on arrival to countries such as Malaysia, Senegal, Singapore and Ecuador. Malawian nationals require a visa to enter about 156 destinations in the world. Some of the destinations for which a prior visa is required are the United States, the European Union, the United Kingdom and Japan.

Altogether, Malawi passport holders can enter a total of 73 destinations—either without a visa, through a visa on arrival, or via an eTA. As a result, the Malawi passport ranks 72 in the world.

Separate from these Malawi visa-free countries and visa-on-arrival countries, there are 156 additional destinations which Malawi passport holders either need a physical visa to enter or an eVisa (i.e. visa required countries).

The Republic of Malawi is a former British colony consisting of 3 regions. The nation is situated in Southern Africa and is bordered by Mozambique, Zambia and Tanzania. Malawi has a surface area of 118,484 square kilometers. This makes it the 36th largest country in Africa. Its climate is subtropical with a rainy and a dry season. Its terrain is characterized by a narrow and elongated plateau with some hills and mountains.

Malawi has an overall population of 19 million people. This makes it the 21st most populated country in Africa. The capital of the nation is Lilongwei, which is also the most populous city with over 1.1 million inhabitants. Other major cities are Blantyre, Mzuzu and Zomba. The largest and only international airport is Lilongwe International Airport (LLW). The airport connects Malawi to a few regional destinations around the country.

Malawian culture is influenced by the Maravi and Bantu people, who originally emigrated from southern Congo. The official religions are a mix between indigenous beliefs and Christianity. The official language is English. The legal system is a combination between the English and customary law. The government type is a presidential republic. The chief of state and the head of government is elected President Lazarus Chakwera. The elections take place every 5 years and the president is elected directly by popular vote.

The official currency of the country is the Malawian Kwacha (MWK) with the current exchange rate being MWK 759 to the USD. The country has an open economy, generating a GDP of approximately $25 billion. Its citizens have a per capita income of $1,234. The GDP is mostly made up of 2 key sectors, which are agriculture and services. The country heavily relies on foreign aid from the IMF and world bank, in order to maintain its GDP. Important export goods are tobacco, tea, sugar, corn, potatoes and cassava.

Malawi is filled with a variety of natural tourism destinations and attractions. It is known for the extremely diverse wildlife and many accessible national parks. The government calls itself “The warm heart of Africa” due to the friendliness of its people. It has two UNESCO world heritage sites spread around the country. Some of the major destinations include the Liwonde National Park, Blantyre, Kasungo National Park, the capital Lilongwe, Lake Malawi National Park, Chitimba. The nation has a total of over 870,000 tourists visiting every year. The majority of which are originating from the neighboring countries.