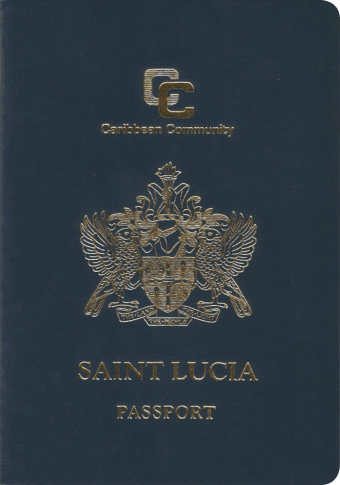 The Saint Lucian passport currently ranks on the 32rd place according to the Guide Passport Ranking Index. It provides visa-free access to 145 countries. This grants it an overall high mobility score and makes it a desirable passport. Saint Lucian passport holders have visa-free access and visas on arrival to countries such as Singapore, United Kingdom, South Korea, Israel and the entire European Union. This allows almost instant travel opportunities to worldwide prime destinations. Saint Lucian passport holders do however require a visa to enter about 199.5 destinations. Some countries where a visa is required are Thailand, the United States and Australia.
St. Lucia offers a Citizenship by Investment program. After a due diligence process and the necessary economic contribution to the country, applicants can obtain St. Lucia citizenship and passport within 4 months.

Separate from these Saint Lucia visa-free countries and visa-on-arrival countries, there are 199.5 additional destinations which Saint Lucia passport holders either need a physical visa to enter or an eVisa (i.e. visa required countries).

Saint Lucia is a former British colony consisting of 10 quarters. The most important quarters are Castries, Gros Islet, Micoud and View Fort. The island nation is situated in the Caribbean, just north of Trinidad and Tobago. It has a total surface of 617 square kilometers. The country’s terrain is defined by volcanic land and mountains with fertile valleys. Its climate is tropical tempered down by northeastern trade winds.

The overall population is approximately 181,889 people. The capital of the country is Castries, which is also the most populous city. Other major towns are Bisee and Vieux Fort. The country’s largest and only international airport is Hewanorra International Airport (UVF). The airport provides access to regional, North American and European destinations. The second airport: George F.L. Charles Airport only handles regional destinations.

Saint Lucian culture is a mix of its African, East Indian, French and English traditions. The majority of the population is Christian. The official language is English. The Saint Lucian legal system is based on the English common law. The government form is a parliamentary democracy under a constitutional monarchy. The chief of state is Queen Elizabeth the II and the head of government is Prime Minister Allen Chastanet.

The official currency is the Eastern Caribbean Dollar (XCD), it is pegged to the USD at a rate of XCD 2.7 since 1976. The country has an open economy, generating a GDP of approximately $2.6 billion, placing it on the 27th spot in the Caribbean and Latin American countries. Its citizens have a per capita income of $15,225. The GDP is mostly made up of the services sector. With 65% of the GDP tourism plays a very important role. Saint Lucia has also developed a steady flow of foreign investment and a strong offshore banking sector.

Saint Lucia is a very popular tourism destination. It is known for its vast beaches and beautiful nature. The main activities for tourists are hiking, trekking, diving and animal watching. Some of the main destinations include the Pitons, Marigot Bay, the Anise Chastanet Marine National Park, Soufrière, the Sulphur Springs Park and Rodney Bay. Saint Lucia has a total of approximately 424,000 tourists visiting every year. Additionally there are many day visitors from the plentiful cruise ship lines stopping over on the island.

The Saint Lucia passport is highly desirable due to its high ranking and the many visa-free countries it grants citizens access to.

Established in 2016, the Saint Lucia Citizenship by Investment program allows qualified foreign investors to acquire legal citizenship and passport in as short as 4 months, through one of the following options:

Citizens of Saint Lucia enjoy several advantages, including the following:

For personalized information on how to apply for Saint Lucia citizenship, contact Guide Consultants through the following options: