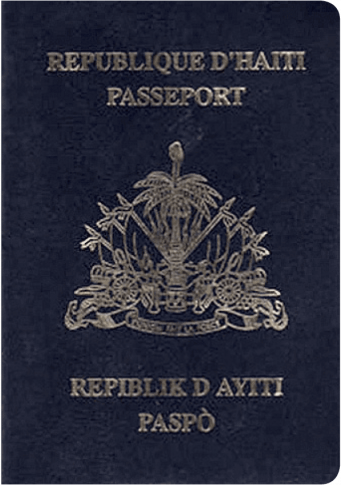 The Haitian passport currently ranks on the 93rd place according to the Guide Passport Ranking Index. It provides visa-free access to only 51 destinations. Haitian passport holders have visa-free access and visas on arrival to countries such as Philippines, Singapore, Kenya and Iran. Haitian citizens require a visa to enter 178 destinations in the world such as China, Russia, the United States and the entire European Union. This high visa requirement results in a very low mobility score.

Altogether, Haiti passport holders can enter a total of 51 destinations—either without a visa, through a visa on arrival, or via an eTA. As a result, the Haiti passport ranks 93 in the world.

Separate from these Haiti visa-free countries and visa-on-arrival countries, there are 178 additional destinations which Haiti passport holders either need a physical visa to enter or an eVisa (i.e. visa required countries).

The Republic of Haiti is a former French colony. Located in the Caribbean it consists of 10 departments. It borders the Dominican Republic and occupies the western part of the Hispaniola island. The most important departments are Ouest, Artibonite and Nord. The Republic of Haiti has a surface area of 27,750 square kilometers. Its climate is generally tropical with semiarid patches in the east. Its terrain is characterized by rugged mountains, coastal plains and valleys.

The overall population is over 11.4 million people. The capital of the country is Port au Prince, which is also the largest city with more than 2.7 million inhabitants. Other important cities of the nation are Delmas, Pétionville and Port-de-Paix. The largest airport is Toussain Louverture International Airport (PAP). Named after the leader of the Haitian revolution: Toussaint Louverture. It connects the country to destinations across the Caribbean, North America and to France.

The Republic of Haiti’s culture is influenced by a mix of European, African and Taino heritage. The main religion of the country is Roman Catholicism. The official languages of the nation are French and Creole. The legal system is based on the civil law influenced by the Napoleonic Code. The government form is a semi-presidential republic. President Jovenel Moise is the elected chief of state and the head of government is Prime Minister Joseph Jouthe. Elections take place every 5 years.

The official currency of the country is the Haitian Gourde (HTG) with the current exchange rate being HTG 63 to the USD. Haiti has an open economy, generating a GDP of approximately $19.9 billion. This makes it the 31st largest economy in the Latin American and Caribbean countries. It has a per capita income of $1,819. The GDP contributing sectors are services, industry and agriculture. Its GDP is strongly reliant on remittances of Haitians working overseas and international aid. The main export products are textiles, clothing, coffee, mangoes, sugar and cocoa.

The Republic of Haiti is a developing tourism destination currently offering limited attractions. It is known for its beautiful beaches and nature. There is one natural UNESCO world heritage site. Although the government is promoting tourism heavily, there are still low numbers of overnight stay visitors. Some of the main destinations are the La Citadelle, La Ferriere, Jacmel, the Furcy Forest and the Sans Souci Palace. Haiti is welcoming 938,000 touristic visitors a year. The majority of which are cruise ship day visitors.