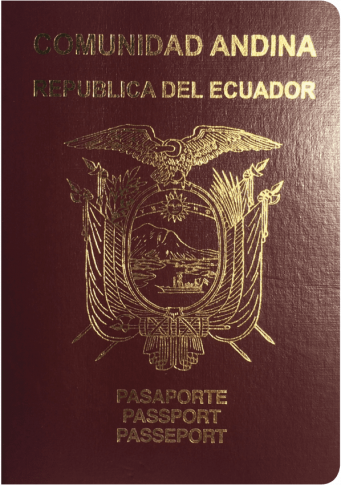 The Ecuadorian passport currently ranks on the 57th place according to the Guide Passport Ranking Index. It provides visa-free access to 95 countries. This grants it an overall medium mobility score. Ecuadorian passport holders have visa-free access and visas on arrival to countries such as Singapore, Russia, China, Brazil and Turkey. Ecuadorian citizens require a visa to enter about 134 destinations in the world. This involves some extended travel preparations. Some destinations where a visa is required are the entire European Union, the United States and Australia.

Altogether, Ecuador passport holders can enter a total of 95 destinations—either without a visa, through a visa on arrival, or via an eTA. As a result, the Ecuador passport ranks 57 in the world.

Separate from these Ecuador visa-free countries and visa-on-arrival countries, there are 134 additional destinations which Ecuador passport holders either need a physical visa to enter or an eVisa (i.e. visa required countries).

The Republic of Ecuador is a former Spanish colony consisting of 24 provinces. The most important provinces are Guayas, Pichincha and Manabí. The total surface area of Ecuador is 283,561 square kilometers. The country is situated in West South America bordered by Peru, Colombia and the Pacific Ocean. The nation’s terrain can be divided in 3 types. In the central highlands you have the Sierra; jungles are on the East and costal plains near the ocean. Its climate is very diverse due to the various elevations. It is tropical along the coast and jungle and becomes cooler inland.

The overall population is over 17 million people. The capital of the country is Quito. The most populous city however is Guayaquil with more than 2.6 million inhabitants. The country’s largest international airport is Mariscal Sucre International Airport (UIO) with 5.1 million annual passengers. This makes it the 20th busiest airport in South America. It is named after independence leader Antonio José de Sucre. The airport provides access to destinations in the Americas and Europe.

Ecuadorian culture is strongly influenced by its Spanish and indigenous heritage. The majority of the population identify themselves as Christians. The official language is Spanish. The Ecuadorian legal system is based on the Chilean civil law. The government form is a presidential republic. The chief of state and head of government is the elected President Lenin Moreno Garces.

The official currency is the United States Dollar (USD). The country has an open economy, generating a GDP of approximately $202 billion. This makes it the 9th largest economy of Latin American and Caribbean countries. Its citizens have a per capita income of $11,701. The GDP is mostly made up of the service and industry sector. Although agriculture does play an important role as well with the export of bananas, coffee and cacao. Oil exports remain extremely important with one third of all exports originating from this industry. The country fell into economic recession in 2015 and has been recovering slowly ever since.

Ecuador has vast cultural and natural wealth, making it a popular destination. It is home to the famous Galapagos Islands and 4 other UNESCO world heritage sites. Some of the major destinations include the capital Quito, Cotopaxi National Park, the Devil’s Nose and the hot springs of Baños de Agua Santa. The main tourist activities are hiking, animal watching and sightseeing. The nation has a total of approximately 3.5 million tourists visiting every year arriving from all over the world. The government plans to further enhance its touristic offerings.