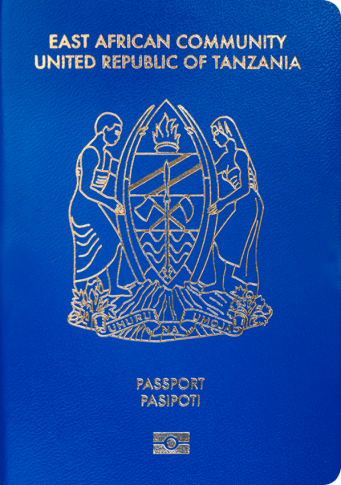 The Tanzanian passport currently ranks on the 73rd place according to the Guide Passport Ranking Index. It provides visa-free access to 72 destinations. This gives it an overall medium-low mobility score. Tanzanian passport holders have visa-free access and visas on arrival to countries such as Malaysia, Senegal, Singapore and Ecuador. Tanzanian nationals require a visa to enter about 157 destinations in the world. Some of the destinations for which a prior visa is required are the United States, the European Union, the United Kingdom and Japan.

Separate from these Tanzania visa-free countries and visa-on-arrival countries, there are 157 additional destinations which Tanzania passport holders either need a physical visa to enter or an eVisa (i.e. visa required countries).

The United Republic of Tanzania is a former British colony consisting of 21 regions. The nation is situated in Eastern Africa and is bordered by Kenya, Malawi, the Democratic Republic of the Congo, Zambia, Burundi, Rwanda, Mozambique and Uganda. Tanzania has a surface area of 947,303 square kilometers. This makes it the 13th largest country in Africa. Its climate varies from temperate in the highlands to tropical along the coast. Its terrain is characterized by plains on the coast, a central plateau and highlands in the south and north.

Tanzania has an overall population of over 56.3 million people. This makes it the 5th most populated country in Africa. The capital of the nation is Dodoma. The most populous city with over 5.2 million inhabitants is however Dar es Salaam. Other major cities are Mwanza, Arusha, Dodoma and Mbeya. The largest airport is Julius Nyerere International Airport (DAR) with 12 million yearly passengers. It is named after the first President Julius Nyerere. The airport connects Tanzania to a variety of destinations in Africa, Europe and the Middle East.

Tanzanian culture is influenced by a multitude of over 130 languages and tribes. The main religion is Christianity. The official languages are English and Kiswahili. The legal system is based on the English common law with a judicial review of legislative acts. The government type is a presidential republic. The chief of state and the head of government is elected President Dr. John Magufuli. The elections take place every 5 years and the president is elected directly by popular vote.

The official currency of the country is the Tanzanian Schilling (TZS) with the current exchange rate being TZS 2319 to the USD. The country has an open economy, generating a GDP of approximately $186 billion. Its citizens have a per capita income of $3,574. The main GDP contributing industries are agriculture and tourism, forming the backbone of the Tanzanian economy. Important export goods are sugar, beer, cigarettes, coffee, sisal and tea.

Tanzania is filled with a variety of urban and natural tourism destinations and attractions. It is known for the extremely diverse wildlife and many accessible national parks. It has 7 UNESCO world heritage sites spread around the country. Some of the major destinations include Mount Kilimanjaro, the Serengeti National Park, Zanzibar, Lake Manyara, Pemba Island and Stone Town. The nation has a total of over 1.3 million tourists visiting every year. The majority of which are originating from Europe and African countries.