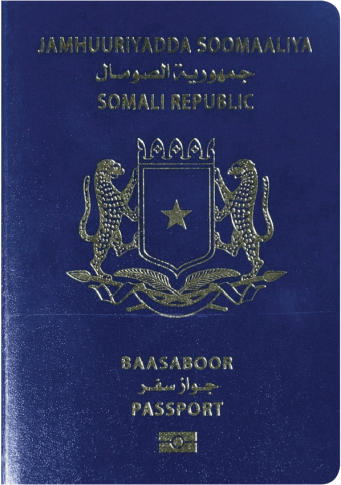 The Somali passport currently ranks on the 108th place according to the Guide Passport Ranking Index. It is considered the 6th lowest ranking passport in the world. Somali passport holders have visa-free access to only 33 destinations including Benin, Dominica, Madagascar and Seychelles. There are 196 destinations for which a Somali passport holder requires to obtain a visa prior to traveling. That is the reason why the Passport Ranking is very low on the overall worldwide mobility score. For major destinations such as USA and the European Union, Somalis require to apply for a visa in advance. Visa applicants need to present documents such as proof of funds and return flight ticket.

Altogether, Somalia passport holders can enter a total of 33 destinations—either without a visa, through a visa on arrival, or via an eTA. As a result, the Somalia passport ranks 108 in the world.

Separate from these Somalia visa-free countries and visa-on-arrival countries, there are 196 additional destinations which Somalia passport holders either need a physical visa to enter or an eVisa (i.e. visa required countries).

The Federal Republic of Somalia is made of 18 regions. It is located in Eastern Africa and borders Djibouti, Ethiopia and Kenya. The most significant regions are Banaadir, Woqooyi and Shabeellaha Hoose. The country has a total surface area of 637,657 square kilometers. The terrain is characterized mostly by highlands, plateaus and plains. Its climate is generally of the desert type with more moderate temperatures in the north.

The overall population is over 15.8 million people. The capital of the country is Mogadishu, which is also the most populous city with more than 3 million inhabitants. The largest airport is Aden Adde International Airport (MGQ). The airport is named after the first President of Somalia, Aden Abdullah Osman Daar. It provides many national and some international flights, specially to the Middle East.

Somalia’s culture is dominated by Islam. The official languages are Somali and Arabic. The legal system is a mix of the civil, customary and Islamic sharia law. The government form is a federal parliamentary republic. The current chief of state is the elect President Mohamed Abdullahi Mohamed. The head of government is Prime Minister Mohamed Hussein Roble. All regions have their regional governments, reporting to the central government in Mogadishu. Families are the backbone of the society, often headed by a patriarch.

The official currency is the Somali shilling (SOS). Its current exchange rate is about 583 shilling to the USD. The country has an open economy, generating a GDP of approximately $13.3 billion. The per capita income is $888. The largest portion of the GDP is generated by the services and agriculture sector. The last one contributing 40% to the GDP. The main export products include bananas, fish, livestock, charcoal and scrap metal. The country is mostly relying on foreign aid in order to improve the overall economic situation.

Somalia is still at the beginning in terms of tourism development. Even though it has many natural and culturally unique attractions for tourists to explore. It has a total of 6 UNESCO world heritage sites scattered across the country. The main destinations for visitors are Hargeisa, Laas Geel, Zeila, Sa’ad ad Din Island, Berbera and the Lag Badana-Bushbush National Park. The capital Mogadishu also offers a variety of museums and exhibitions showcasing the history and natural beauty of the country.

St. Vincent and the Grenadines
VISA ON ARRIVAL
23 Destinations