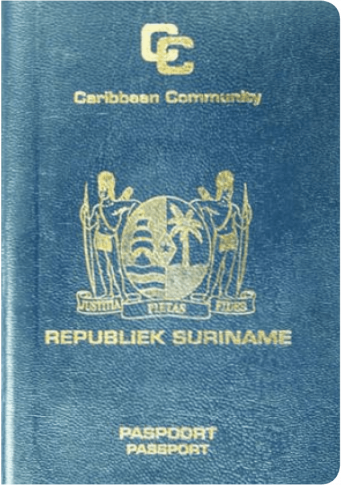 Separate from these Suriname visa-free countries and visa-on-arrival countries, there are 151 additional destinations which Suriname passport holders either need a physical visa to enter or an eVisa (i.e. visa required countries).

The Republic of Surname is a former Dutch colony consisting of ten districts. It is located in Northern South America bordering with French Guiana, Brazil, Guyana and the North Atlantic Ocean. The most important provinces are Paramaribo, Wanica and Sipaliwini. Suriname has a surface area of 163,821 square kilometers and is therefore the smallest country in South America. The country is characterized by rolling hills and a narrow coastal plain. Its climate is tropical with dry season and a short rainy season from April to July.

The overall population is around 575,990 million people. The capital of the country is Paramaribo, which is also the most populous city is with over 240,000 inhabitants. It is followed by Leydorp, Niew Nickerie and Moengo. The largest international airport is Johan Adolf Pengel International Airport (PBM). It Is named after former Prime Minister Johan Adolf Pengel. The airport connects Suriname to several South American destinations and to Amsterdam.

Suriname’s culture is very diverse with Asian, African and European influences. There is a mix of religions being practiced. The official languages in the country are Dutch and Sranang Togo. The legal system is based on Dutch civil law. The government type is a presidential republic. The chief of state and at the same time head of government is the President Chandrikapersad Santokhi.

The official currency of the country is the Suriname dollar (SRD) with the current exchange rate being SRD 14 to the USD. The country has an open economy, generating a GDP of approximately $9 billion, making it the 23rd largest economy in South America. Its citizens have a per capita income of $15,845. The GDP is mostly made up of 3 key sectors, which are services, industry and agriculture. The economy is dominated by the mining sector. Oil and gold make up to 85% of the total exports. Other goods of export are lumber, fish, rice and bananas.

Suriname is filled with a variety of urban and natural tourism destinations and attractions. It is known for its two UNESCO world heritage site and its many historic places. Some of the major destinations include the capital Paramaribo, the Galibi Coppename Nature Reserve, the Central Surname Nature Reserve, the central market and Marienburg. The country is still a developing destination with relatively limited touristic infrastructure. The nation has a total of 279,000 tourists visiting every year with the majority originating from the neighboring countries, the United States and Europe.