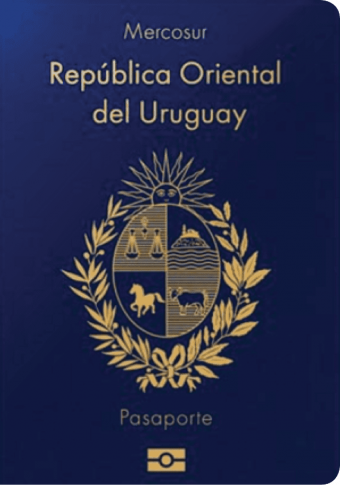 The Uruguayan passport currently ranks on the 26th place according to the Guide Passport Ranking Index. It provides visa-free access to 157 countries. With a high mobility score it is one of the more desirable passports in the world. Uruguayan passport holders have visa-free access and visas on arrival to countries such as United Kingdom, United Arab Emirates, Russia and the entire European Union. This allows almost instant travel opportunities worldwide. Uruguayan passport holders do however require a visa to enter about 72 destinations in the world. Some countries where visa is required are China, India and the United States.

Altogether, Uruguay passport holders can enter a total of 157 destinations—either without a visa, through a visa on arrival, or via an eTA. As a result, the Uruguay passport ranks 26 in the world.

Separate from these Uruguay visa-free countries and visa-on-arrival countries, there are 72 additional destinations which Uruguay passport holders either need a physical visa to enter or an eVisa (i.e. visa required countries).

The Oriental Republic of Uruguay consists of 19 departments. The most important departments are Montevideo, Canelones and Maldonado. The nation is situated in South America bordering the countries of Argentina and Brazil. Uruguay is the 2nd smallest country in South America with a surface area of 176,215 square kilometers. Its climate is temperate with hot summers and mild winters. The terrain is characterized by rolling plains, low hills and fertile costal land.

The overall population is over 3.5 million people, making it the 10th largest country in South America. The capital of the country is Montevideo, which is also the most populous city with more than 1.7 million inhabitants. It is followed by Salto and Ciudad de la Costa. The largest airport is Carrasco International Airport (MVD) with 2 million annual passengers. The airport connects the country of Uruguay to destinations in South America, North American and Europe.

Uruguayan culture is dominated by its European ancestry with South European traditions. There is a multi-cultural and religious mix present in most of the country with the Roman Catholic belief being predominant. The official language is Spanish. The legal system is based on the Spanish Civil Code. The government type is a presidential republic. The chief of state and at the same time head of government is the elected President Luis Alberto Lacalle Pou.

The official currency is the Peso Uruguayo (UYU) with the current exchange rate being UYU 43 to the USD. The country has an open economy, generating a GDP of approximately $86.5 billion, making it the 15th largest economy in the Latin American countries. Its citizens have a per capita income of $24,516. The GDP is mostly made up of 2 key sectors, which are services and industry. Some of the most important export products are electrical machinery, petroleum, textiles, cellulose, beef and soybeans.

Uruguay is known for its vast nature and beautiful coastline. There are a total of 2 cultural UNESCO world heritage sites scattered across the country. Some of the major destinations include the capital Montevideo, Punta del Este, Colonia del Sacramento, Punta del Diablo, Cabo Poonio and Casapueblo. The nation has a total of approximately 3.2 million tourists visiting every year with the majority originating from North and South America. This makes Uruguay one of the most visited countries in South America.